Due to changes within the postal system we can no longer ship just one single CD (or we could but shipping would be very expensive)
as minimum shipping fee will be for one kilo (more or less 6-7 CDS).
We are very sorry for this change but we have no way to influence the current changes within the postal system.
On the other hand we will offer discounts on bigger orders as much as possible.

Please send an e-mail with the titles you wish to order and include your full address and phone number (needed for fedex)
to lion.sales(at)lionmusic.com and we will give you our best price including shipping.  You can pay vith credit card through PayPal or via bank transfer. 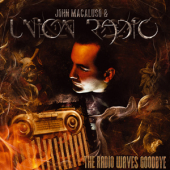 Comments: John Macaluso has been bashing the skins for many of rocks elite bands across the genre. TNT, ARK and Yngwie Malmsteen are just a few of the many bands where Macaluso has tenured. With over 200 releases to his credit it is only fitting that Macaluso first solo release would feature a host of progressive rock celebrities that have inspired fans and musicians alike. The list of names is quite extensive and includes James LeBrie, Vitalij Kuprij, Mike Demeo, Jack Frost, Randy Coven, Chris Caffrey and Alex Masi.

The Radio Waves Goodbye features 13 songs that fall within the progressive genre, not just metal but atmospheric rock that pulls from across a variety of varied musical influences. Macaluso is inspired, he is having fun, he's serious and dramatic, and all these emotional elements shine through along the musical escapade.

LaBrie opens up the CD lending his voice to "Soul In Your Mind" … you are instantly going to be thinking "…oh this sounds like Dream Theater." Well you have ¼ of the band performing, the music is progressive and Dream Theater pushed that door wide open early on for others to follow the band through.

Former Riot and current Masterplan vocalist Mike Demeo takes the microphone on "Mother Illusion." An experimental futuristic song that could have been on an Ark release is interesting and highlights Macaluso snare work. "The Prayer Pill" has a jazzy, airy feel; again the snare drum and high hats stand out as well. "Dissolved" highlights weird synthesizer melodies that provide tension and atmosphere for Macaluso percussive exploration.

"Gates to Bridges" finds Dimeo making his next appearance along with guitarist Chris Caffrey. A Hammond style organ carries the melody under the verse giving it an earthy Porcupine Tree feel. The chorus though goes for an angry metallic tonality. The rhythm guitar provides a short burst of speed metal, laced with a harmonized riff.

Vocalist Adrian Holtz appears on the majority of the songs on The Radio Waves Goodbye. "Shimmering Grey" continues the earthy progressive sound of the CD. Holtz vocals are reminiscent of Kip Winger, at times singing in hushed tones he opens up on the chorus which has a strong Winger vibe. The song has an open and warm feel and moves without a sense of urgency.

The first of two instrumental songs, "T-34," opens with fusion inspired yet jazzy piano montage and moves into piano driven ballad. Macaluso and Kuprij perform together with precision and both accent each others performance with blinding brilliance. "Pretzel" the second instrumental pays tribute to live drum solos often taken for granted by many concert goers. In between the banter of a less than enthused fan (when it comes to drum solos) Macaluso gets a bit whimsical and unleashes on his kit like a man possessed. A very cool and inspiring listen; the song highlights the talent of the drummer.

Macaluso takes over the vocal duties on "Away With Words" and "The Six Foot Under Happy Man." "The Six Foot Under Happy Man" is a throwback to the music of the '20s and '30s and gets a bit quirky with Frank Zappa style freakiness and big band style woman led choir vocals from that time period. "Away With Words" continues the atmospheric vibe. The vocals here are mainly used as added coloring winding its way amongst the instrumentation.

"Yesterday I'll Understand" introduces Don Chaffin on vocals. This is another song where the verses build up to huge choruses. "Things You Should Not Know" and "Staring "Pain" put the vocals back in the hands of Adrian Holtz and continue to envelope the listener with crafty well written songs.

Progressive without the metal, explorative and adventurous, Macaluso first solo release throws away any attempt to be pigeonholed as one-dimensional. At most times The Radio Waves Goodbye provides a peaceful and serene setting for your listening pleasure. But also includes brief excursions into heavier landscapes just to keep you on your toes.